2023 Tanzania: The Serengeti & Beyond 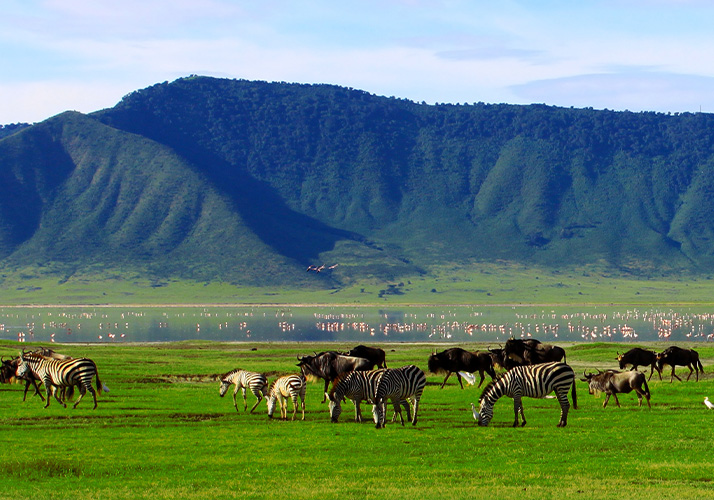 For the first time in over 13 years, the NEW Zoological Society is hosting a conservation trip to Africa. Join NEW Zoo Curator of Animals, Carmen Murach, on a 10-day conservation trip through the African nation Tanzania that will include safaris and guided excursions.

Partnering with Sunset Family Travel and Globus, the NEW Zoological Society has designed a luxury trip to connect travelers with wildlife in the wilds of Africa.

Featuring exhilarating wildlife safaris through grasslands, woodlands, and swamplands—plus distinctive safari lodges that blend into the living landscape, this Africa vacation was designed for those who like to take a walk—or a nap—on the wild side. Wildlife safaris through Tarangire, Lake Manyara, and Serengeti National Parks—as well as the vast, volcanic Ngorongoro Crater—offer an opportunity for up-close views of the “Big 5” (lion, leopard, elephant, rhino, and Cape buffalo) as well as countless other majestic creatures. As you explore these mesmerizing parks, prepare to see zebra grazing, hippo bathing, elephants trumpeting and, if luck is on your side, cheetah sprinting. Marvel at Maasai Warriors jumping in celebration of life. There’s lots to fall in love with on this timeless Tanzania safari, including morning mimosas and sundowner drinks in the bush as you quench your thirst for knowledge and adventure.

Bookings will be accepted until December 7, 2022.  Space is limited to 32 passengers.

Single Supplement is an additional $208 for the first four single rooms booked.

**Not included in the tour price: Airline baggage fees, passport and visa fees, meals not included in the itinerary, all items of a personal nature such as laundry, cleaning, telephone, internet, or fax expenses, beverages including tea and coffee (except at breakfast and at hotel dinners), liquors, and soft drinks. 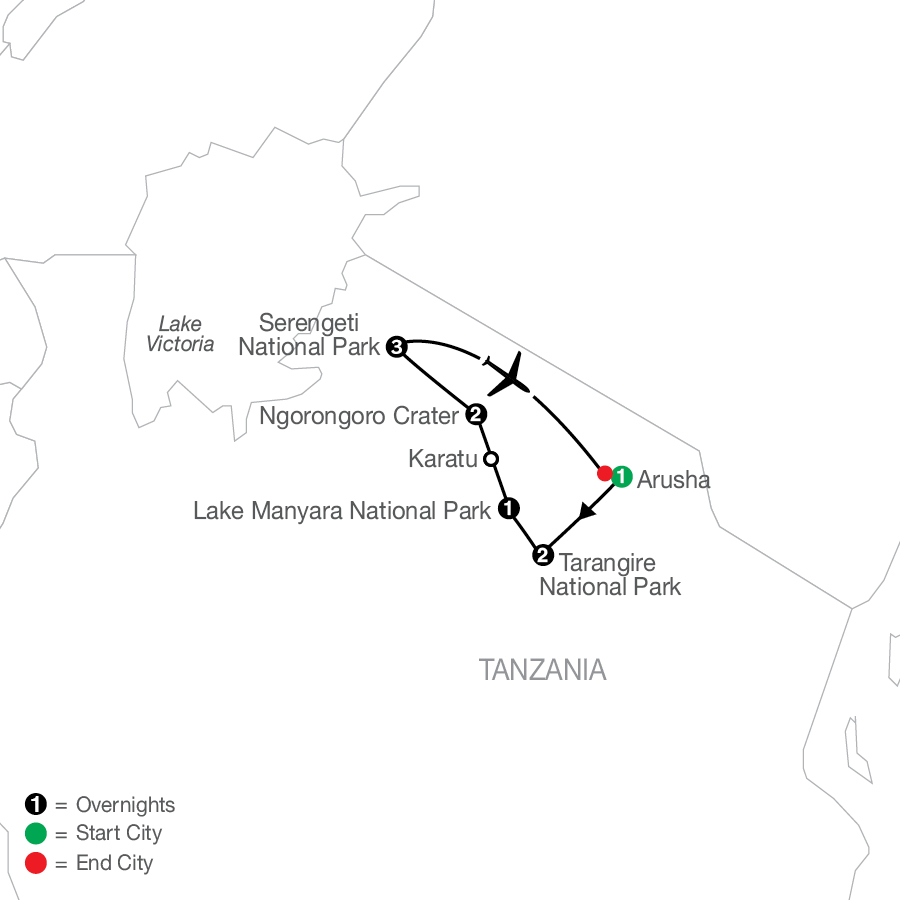 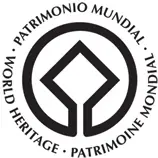 World Heritage Sites are designated by the United Nations Educational, Scientific and Cultural Organization (UNESCO) for having cultural, historical, scientific or other form of significance. The sites are judged to contain cultural and natural heritage around the world considered to be of outstanding value to humanity.

The following UNESCO World Heritage Sites can be seen or visited on this vacation: 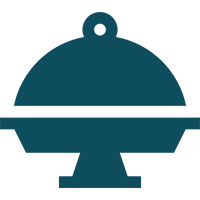 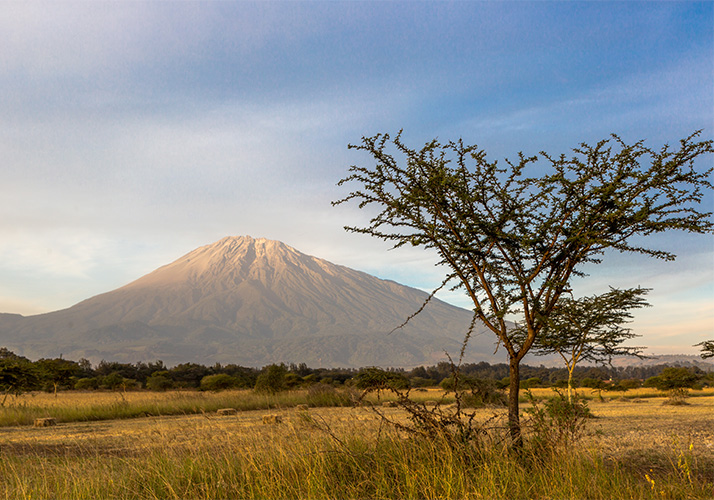 Lodging provided at the Arusha Serena Hotel, Resort, and Spa. 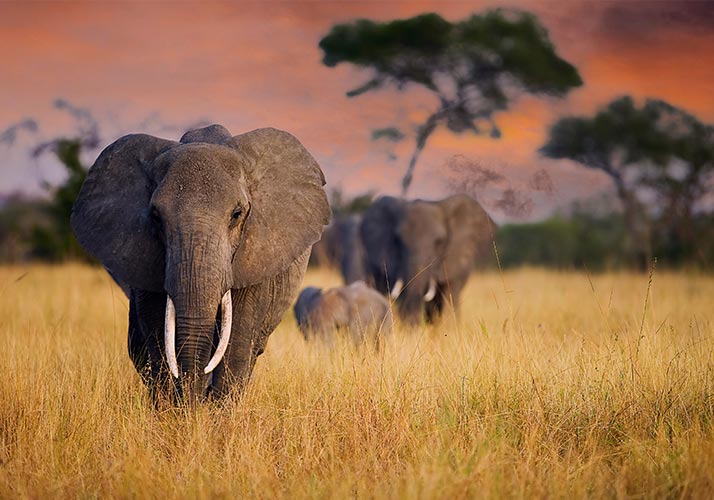 Depart this morning on a scenic drive to Tarangire National Park where baobab and acacia trees dot the landscape. The Tarangire River provides the park with a permanent water source which makes for great wildlife safari viewing year-round. This is highlighted by the large population of elephants. After a picnic lunch, embark on your first exciting late afternoon wildlife safari. 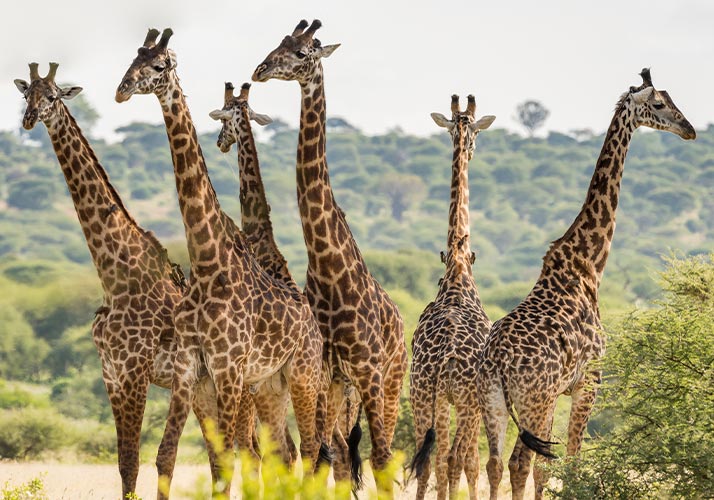 Rise early for a morning wildlife safari including an exclusive bush breakfast with mimosas. Be sure to watch for giraffes, zebra, Cape buffalo, and much more. Free time at your lodge before an afternoon wildlife safari. 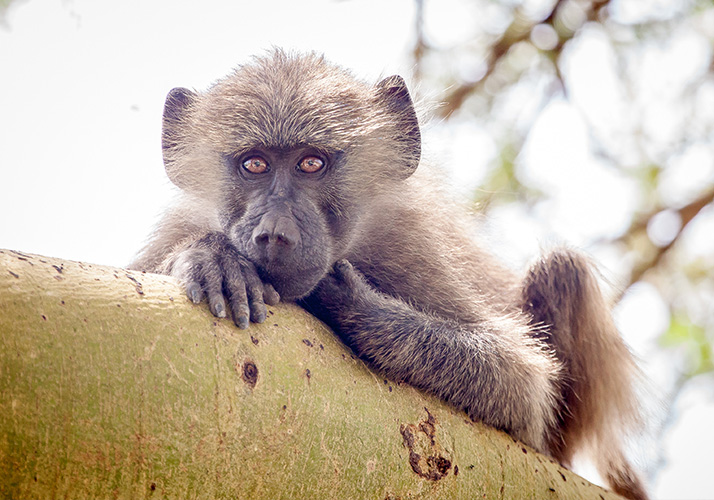 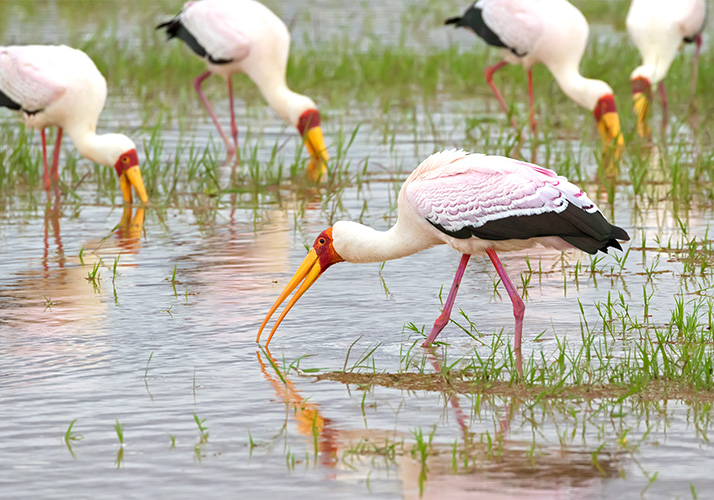 After breakfast, drive towards Lake Manyara National Park, a small, ecologically diverse park with groundwater forests, grassy plains, and alkaline Lake Manyara itself. It is also the home of the world’s largest concentration of baboon. Experience a guided tour and lunch at the Mto Mbu Village where 120 tribes live peacefully. Afterwards, continue to Lake Manyara for an afternoon wildlife safari, followed by sundowner cocktails in the bush with spectacular views of Lake Manyara. 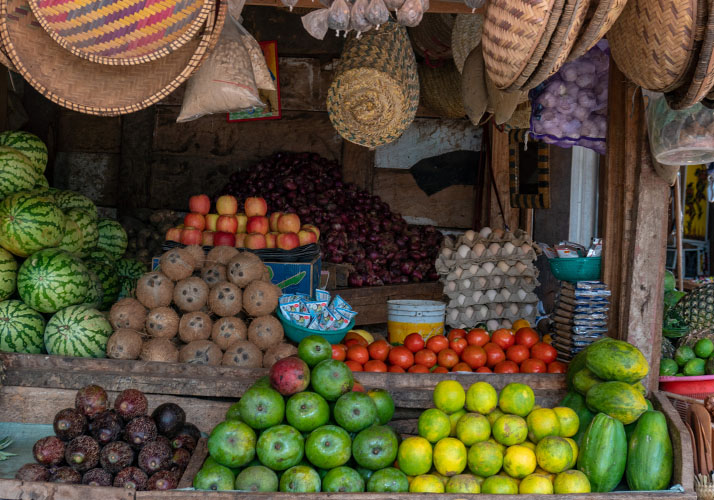 Drive to Karatu where coffee farms dot the outer slopes of the Ngorongoro Crater. Check out the city highlights including their marketplace and brewery, and then enjoy a lunch at beautiful Gibb’s Farm. Continue to your lodge located on the rim of the crater. 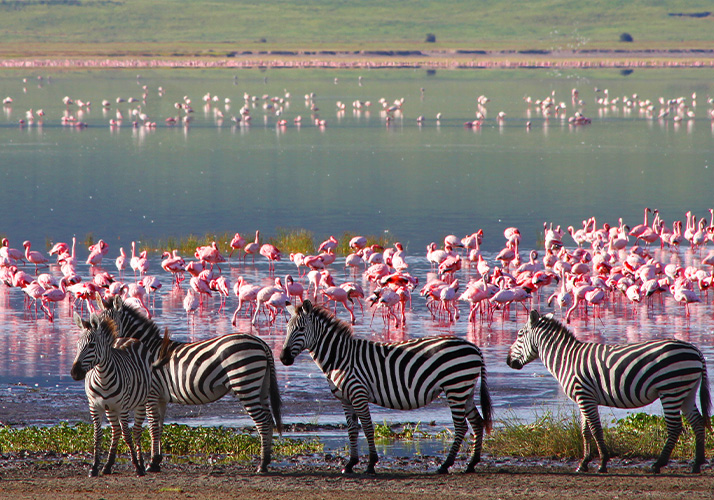 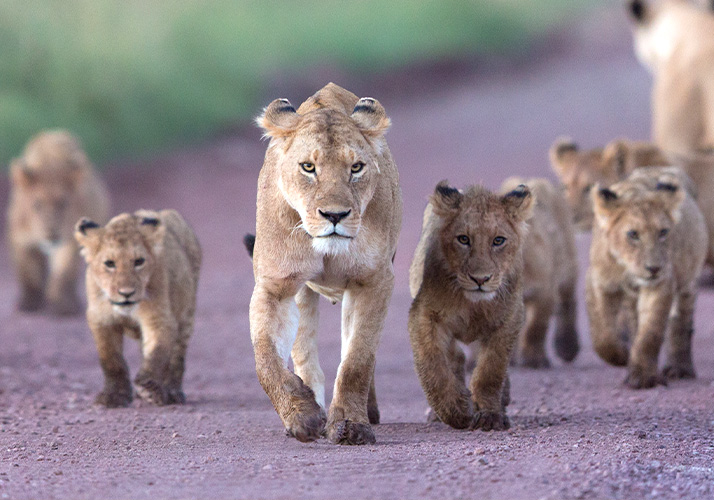 Descend into the Ngorongoro Crater for a full-day wildlife safari which includes a picnic lunch. Wildlife viewing here is fantastic, as most of the animals stay in this area year-round. You can see lion, hyena, hippo, elephant, and more. This is also your best chance to see the rare black rhinoceros. Visit to a Maasai Village. 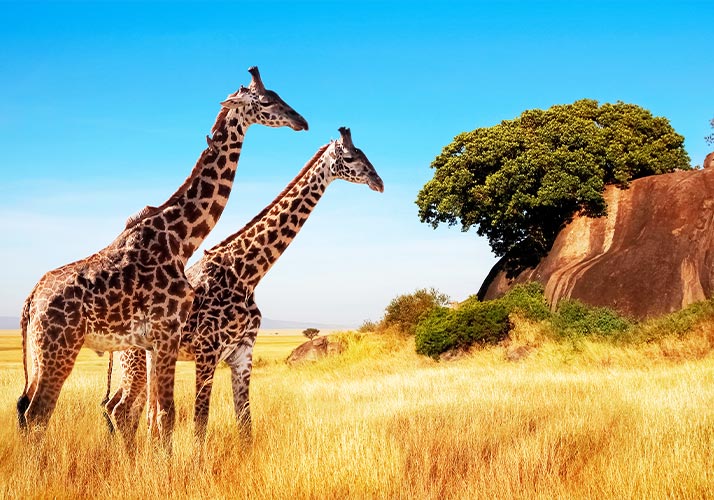 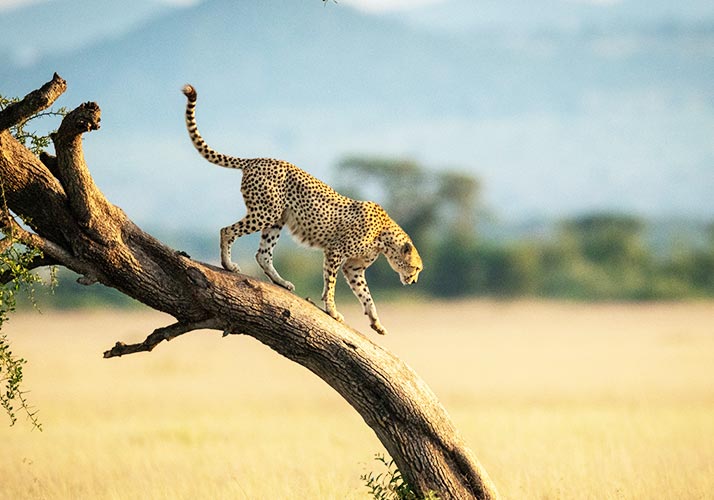 Scenic drive to Serengeti National Park, Tanzania’s largest and most famous park. The Serengeti covers an area of roughly 5,700 square miles, so it is no surprise that the name comes from the Maasai word siringit, meaning “endless plains.” Enjoy a picnic lunch before an afternoon wildlife safari drive. You have the chance to see the big cats—lion, leopard, and cheetah—as well as an abundance of other animals, including the Nile crocodile, giraffe, gazelle, and eland. 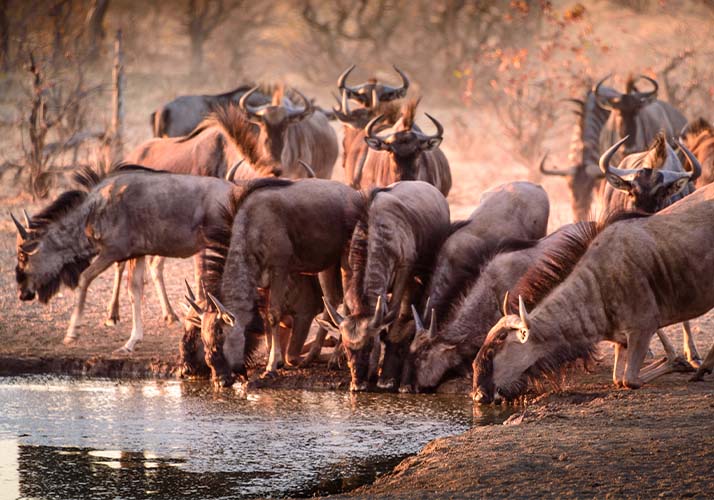 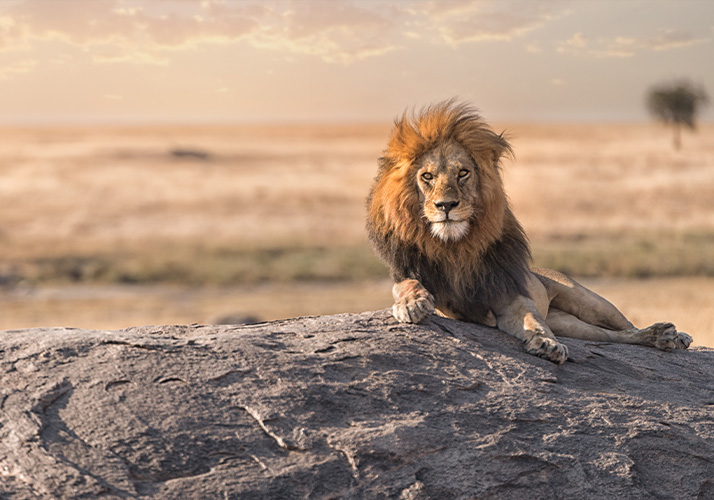 Continue your exploration during morning and afternoon wildlife safaris, with some leisure time in-between. Home to the annual Great Migration of wildebeest and zebra, the Serengeti attracts visitors from around the world and is great for wildlife viewing year-round. End the day with sundowners in the Mbwinge Valley. 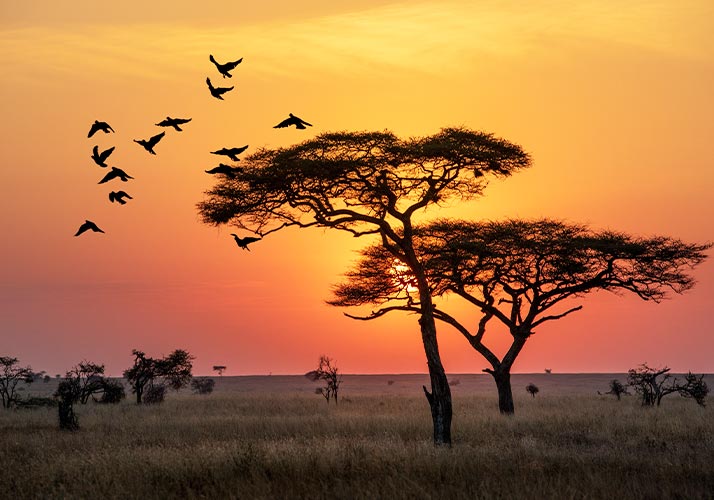 Morning and afternoon wildlife safaris. Farewell dinner in the bush featuring a traditional Maasai dance performance. A celebration of an ancient culture amid the majestic wildlife who find sanctuary here. The Maasai people bring a history of colorful culture tied to this wilderness known as the cradle of life. The perfect ending to a spectacular safari adventure. 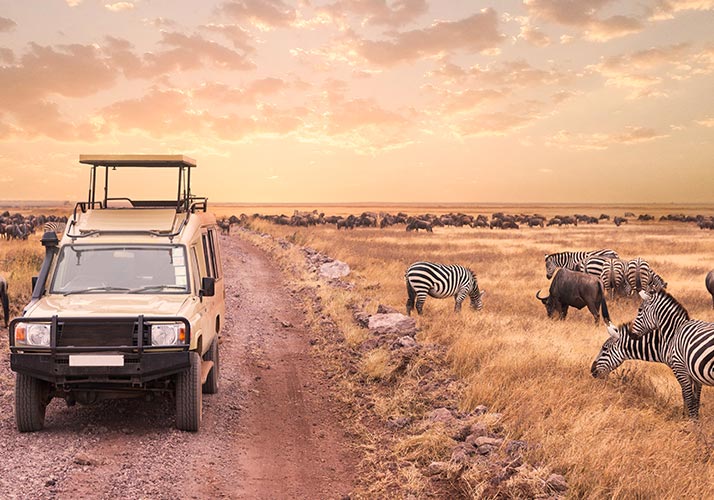 You will be provided a local, professional and multilingual Tour Director for the duration of your tour.

At this time, COVID-19 vaccinations are not required for this trip, but this could change at any time.

Tanzania currently requires those who are NOT vaccinated, to obtain a negative PCR or NAAT COVID test 72 hours before departure.

Fully vaccinated travelers will be exempted from the testing requirement and will be required to present a valid vaccination certificate with QR code.

Current testing/vaccination information from the U.S. Embassy in Tanzania can be found on their website: https://tz.usembassy.gov/covid-19-information/

According to the Centers of Disease Control (CDC), it is highly recommended that all passengers traveling to Tanzania receive the following vaccines one month before departure:

The CDC also recommends that passengers be up-to-date on all routine vaccines including, but not limited to:

Please contact your personal health care provider to obtain any of these vaccines.

Are you ready to pack your bags?